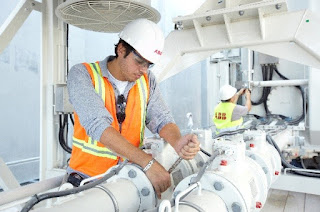 The final element of a safety instrumented function is usually the greatest contributing part of the overall SIF PFDavg calculation. Valves can sometimes contribute to around 90% of the breakdown of the PFDavg for the SIF, causing  reliability engineers to struggle with applying an appropriate proof test ‘effectiveness factor’ which can be used within the PFD calculation itself.

Often, the difference in PFDavg for any assumed proof test effectiveness which is lower than that which is afforded in the operating environment, can reduce the desired target risk reduction factor.

To overcome this problem, many engineers implement ‘partial valve stroke testing’, hoping that the additional credit given to this type of test will improve the overall SIF PFDavg calculation. However, another dilemma arises when this type of approach is being considered, namely whether the same value of proof test effectiveness can be used for the valve regardless of whether the intended Partial Valve Stroke Test (PVST) is performed or not.

A proof test is a periodic test performed to detect the dangerous hidden faults in a SIF so that, if necessary, a repair can restore the system either completely or as close to the ‘as new’ condition as possible.

The “hidden faults” are those faults that are not detected by operators, inspection, automatic diagnostic tests, or Partial Valve Stroke Test (PVST). In other words, if a device fault is detected, then the device is repaired and this type of fault “does not exist” during a subsequent proof test – that is, it cannot be detected again during the proof test. Although reliability calculations should include this fact in the claimed proof test effectiveness, this is often overlooked.


The failure rates for an example valve have been taken from a relevant SIL certificate and are shown below. 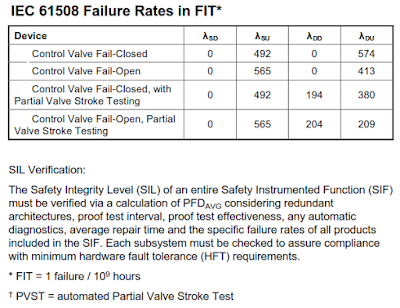 For this example, let’s assume that our process application requires the valve to be closed on demand within three seconds. In the table above, we can see that for ‘Control Valve Fail-Closed’ the dangerous undetected failure rate is 574 FIT (Failures In Time).

In the accompanying valve Failure Mode Effect Diagnostic Analysis (FMEDA) report, we can see that it is claimed that 70% of all dangerous undetected failures are detected by valve full stroke test. This type of test can detect issues such as a jammed stem, some seating problems and/or external leakage. It means that 402 (70% of 574) FIT are detected and 172 FIT (574 - 402 = 172) cannot be detected by this full stroke test. These calculations will form part of the required proof testing of the valve.

So far, so good. Let’s now analyse what happens if we implement these two tests together by performing a proof test after PVST has occurred.

Once the PVST is completed, the jammed stem failures will no longer be ‘dangerous undetected’ and therefore would not be targeted for detection during the proof test.
Given the failure rates in the example:
It means that the proof test can detect 208 FIT (380-172 = 208) compared to the PVST methodology, which does not include seating problems or external leakage.

So, if the proof test is done after the PVST has been completed, this test can detect only the 208 FIT. The effectiveness for the proof test being done after PVST is therefore 208/380 = 55%. Clearly this is a lot lower than the declared 70% proof test effectiveness indicated in the device information supplied, especially because valves are usually the greatest contributing part of the overall SIF PFDavg. This may lead to the SIF not reaching its target PFDavg.

The table below provides a summary of the above description.

The takeaway message:
The advantage of PVST is that some failures can be detected earlier so that the device can receive timely repair and will be available when real process demands occur. However, we should adjust the proof test ‘effectiveness factor’ if PVST is to be designed into the SIF and a test frequency assigned & performed. If this is not addressed, then the calculated PFDavg will lead to overly optimistic SIL PFDavg results, where greater risk reduction claims are made than is necessarily provided by the devices in use.

The takeaway question:
Do you consider the above criterion for establishing a suitable proof test effectiveness factor when calculating the PFDavg for your SIF’s?

Need help with any of the terminology? Try our Safety Terms Jargon Buster.
Posted by Ed Neale at 10:53

Functional Safety is a multi-faceted subject that requires a thorough understanding of the factors involved and how they interact with one another to help minimise the risk of failures caused by operator errors, hardware failures and environmental changes.
Created by ABB's Safety Lead Competency Centre (SLCC), this blog covers the key challenges and considerations involved in the design, operation and management of functional safety systems in industrial applications.